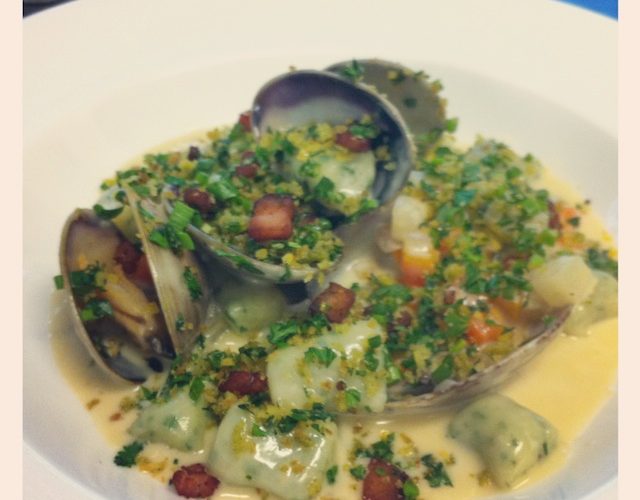 I challenged a colleague to a cook-off today. One hour to make one dish with mussels or clams as the main ingredient. An impartial judge would then taste the two dishes and makes a decision. Sounds like fun, right?

I made a riff on clam chowder – kind of Italy meets the Northeastern United States. First I made a fish stock with some sablefish bones and bacon scraps that were around and used that as the base of my “chowder sauce”. The usual suspects were then sauteed (onion, carrot, celery, fennel, garlic) in butter, deglazed with white wine, followed by fish stock, and finished it with a little cream. While the sauce was being made, I had a potato baking in the oven, which became herb gnocchi. Some herbs were kept aside to garnish to finish the sauce, but I accidentally threw some crispy bacon bits in with them (not my intention), and a lightbulb went off – how about bacon gremolata? Some lemon zest and crispy breadcrumbs were added and there was the garnish. The clams were steamed in the sauce, blanched gnocchi added, finished with lemon juice, plated simply and scattered with my newfangled bacon gremolata.

It was determined to be a draw by the judge. More cook-offs are in order.